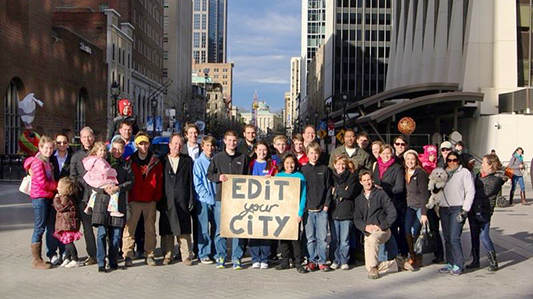 LocalWiki is a grassroots effort to collect, share and open the world’s local knowledge. We want anyone, anywhere to be able to learn about where they live — their local government, the history of their neighborhoods, streets, social movements, noteworthy local figures, social services, schools — every facet of life in their community. And we believe that this vast collection of local knowledge should be created by the people who know it best — individual community members working together.

Whether building transparency, accountability and trust between government and residents, appreciating the beauty and the quirks of a community’s unique history, or helping each other navigate invaluable local resources, each month over 400,000 people in 300+ communities around the world use LocalWiki to learn about and improve their community.

We are a 501(c)3 non-profit organization based in San Francisco, California. Learn more about us on our blog or follow us on twitter or facebook. And visit our guide site to learn how to get involved with LocalWiki!

What do people use LocalWiki for?

For lots of examples of how people are using LocalWiki, see our page on civic engagement and our best of LocalWiki page.

In 2004 we started the Davis Wiki, an experimental project to collect and share interesting information about the town of Davis, California, that soon became the largest, most used media source in the city. In a week, nearly half of residents use it; in a month, nearly everyone uses it. And 1 in 7 residents contribute material to the project. Today the residents of Davis use it for everything from learning about local news and local history to helping return lost pets to their owners.

After years of occasionally working on the project in Davis, we began the LocalWiki project in late 2010. Our goal with LocalWiki was to bring the kind of amazing, collaborative information resource that the DavisWiki represented to as many communities as possible. In late 2010, we received a News Challenge grant from the John S. and James L. Knight Foundation to support the early technical development behind the project.

After experimenting with a variety of approaches — and growing LocalWiki to over 300 communities — we re-launced LocalWiki as a global, hosted platform for local knowledge sharing in in early 2015.

Philip Neustrom is a software engineer in the San Francisco Bay area. He co-founded DavisWiki.org in 2004. For the past several years he has worked on a variety of nonprofit efforts to engage everyday citizens. He oversaw the development of the popular VideoTheVote.org, the world's largest coordinated video documentation project, and was the lead developer at Citizen Engagement Laboratory, a nonprofit focused on empowering traditionally underrepresented constituencies. He is a graduate of the University of California, Davis, with a bachelor's in Mathematics.

Vicky Knox is a polyglot and former Wikipedian who fell in love with LocalWiki's vision to create a global local knowledge commons. She is a founding contributor to the Oakland LocalWiki, and has been an active organizer of numerous LocalWiki editing events (such as this one on gentrification in San Francisco). She strives to be kind, caring and welcoming to LocalWiki contributors of every ability and experience level.

Mike Ivanov is a software engineer in the San Francisco Bay Area. He previously worked at Palo Alto Research Center. In 2004 he co-founded the Davis Wiki, the world's largest and most active community wiki. He is a graduate of UC Davis, with a BS in Mathematics and a minor in Managerial Economics.

Kurt Collins has worked in youth development at Youth Radio and as a co-founding mentor at The Hidden Genius Project. As a founding mentor for The Hidden Genius Project, he mentors high school-aged black males in learning STEM-related skills through learning about technology. Kurt has been working with entrepreneurs and technology since his tenure at MIT in the late 90ʼs.

Eugene Eric Kim has spent over 10 years helping groups learn how to come alive and collaborate more skillfully together. He co-founded two social change consultancies in this pursuit: Blue Oxen Associates and Groupaya. He worked with C-level business leaders and social activists, rocket scientists and spies, billionaires and hackers, foundations and farmers. Eugene designed and lead the Wikimedia strategic planning process from 2009-2010.

Jennifer 8. Lee is the president and cofounder of Plympton, a literary studio that publishes serialized fiction for digital devices. She was a reporter at The New York Times for nine years and is the author of “The Fortune Cookie Chronicles,” a New York Times-bestselling book on how Chinese food is all-American. She is also on the boards of the Nieman Foundation, the Center for Public Integrity, the Asian American Writers Workshop, and the New York Public Library Young Lions committee.

Max Ogden is a computer programmer living in Oakland, CA. Formerly Max was a Code for America fellow and now works on a grant funded software project in the field of open data and scientific research collaboration. Max is passionate about teaching and enabling the sharing of information.

Dr Rufus Pollock is a Founder and CEO of the Open Knowledge Foundation, an international non-profit network passionate about openness, and which is using advocacy, technology and training to unlock information and turn it into insight and change. He was formerly a Shuttleworth Foundation Fellow and a Mead Fellow in Economics at Emmanuel College, University of Cambridge and is currently an adviser on open data to several governments. He has worked extensively as a scholar, activist and technologist on the social, legal and technical challenges around the creation and sharing of knowledge.

James Rucker is Chairman and Co-founder of ColorOfChange.org and Citizen Engagement Laboratory (CEL). Founded in the wake of Katrina, ColorOfChange.org is the leading online citizen lobby for African-Americans and their allies. CEL was founded three years later to serve as an incubator and accelerator for online organizing efforts and has helped create or support efforts like Presente.org, ForecastTheFacts.org, and WeAreUltraViolet.org. Prior to co-founding ColorOfChange.org and CEL, James was director of grassroots mobilization at MoveOn.org.

Elizabeth Stark has taught at Stanford and Yale about technology and the Internet. She is a cofounder of the Open Video Alliance, which seeks to promote innovation and free expression in online video. Stark has spent years working on open Internet issues, and was one of the key organizers in the anti-SOPA movement that engaged 18 million people worldwide. She is a mentor with the Thiel Fellowship, serves on the board of Demand Progress, and is an Entrepreneur-in-Residence at Stanford's StartX. Stark is a graduate of Harvard Law School and an affiliate of Harvard’s Berkman Center for Internet & Society.

Looking for our Press Kit?